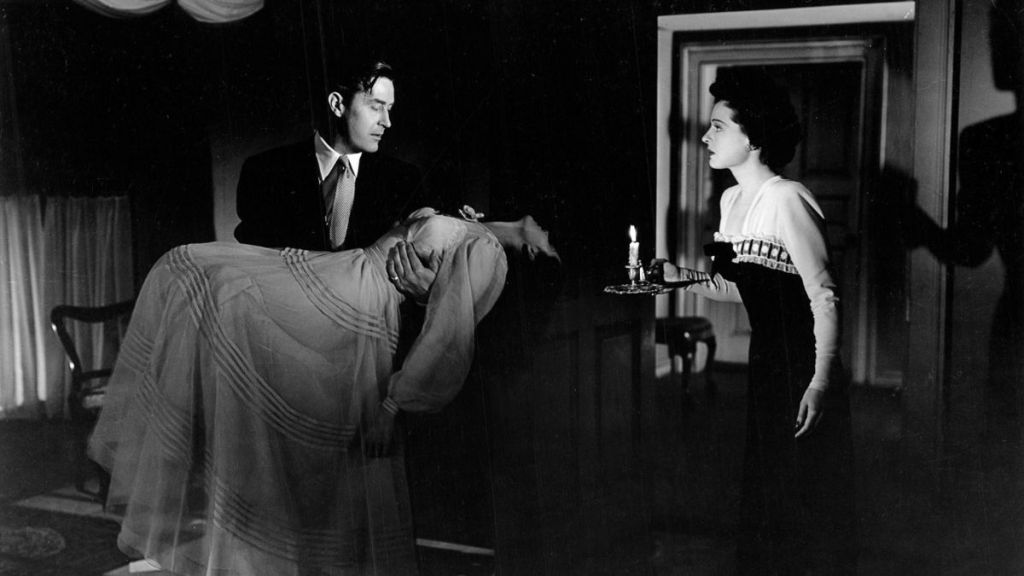 The plot of The Uninvited is almost like a reconceptualization of Daphne de Maurier’s Rebecca, and the Hitchcock adaptation was released a few years before this. So it’s hard not to compare them, especially when Mrs. Danvers reappears in Cornelia Otis Skinner’s character and both pine for women who are decidedly less saintly than they’re first made out to be. Nevertheless, they’re still two distinct entities. Whereas Rebecca is a gothic romance rather than a straight supernatural chiller, The Uninvited does not try to hide the fact that a ghost story lies at its forefront. The ghosts that haunt Windward House exist. The mystery lies in finding their purpose, and why they attach themselves most strongly to the young Stella Meredith. In a kind of Agatha Christie-meets-Scooby-Doo cross, the “sleuths” are a lighthearted brother and sister act—refreshing, considering the Thin Man film series was still going strong. There’s a mixture of melodrama with the repartee the Fitzgeralds bring, their presence assuring us all will end well. At one point, Ray Milland even admonishes one of the ghosts, and if the ghost could have spoken, I’m sure she would’ve used the ol’ “And I would’ve gotten away with it too, if it weren’t for you meddling kids.”

Now, I’m aware that Scooby-Doo didn’t exist yet, and that the point of the show was that, no matter how supernatural the villain, the explanation was always rational. The Uninvited, on the other hand, entertains the irrational. I use the popular children’s show as a point of comparison because the tone is similar: light, with an undercurrent of menace. It’s a nice change of pace for the genre, which still took itself seriously at the time. Here we see a bit of levity amidst the seriousness. The marriage isn’t quite seamless, yet one can appreciate it. It doesn’t leave you feeling all sullen and helpless. The evil is drawn out and vanquished, and it’s done with a bit of cheek.

A few elements don’t work, and they’re hard to suss out. Gail Russell is very green here, and knowing how badly her life spiralled out of control in later years, it’s almost tragic seeing her soldier on despite her fearful eyes telling a different tale. As well, the whole backstory surrounding Stella’s parentage feels too… concocted. All the strands tangled this way and that without it feeling natural. Plus, the untangling happens too late into the film for you to care. Had the investigative stuff been evenly distributed, it might’ve been more effective. The ending might’ve been more emotionally involving.

It’s still a solid film, though. The special effects are really well-done without ever feeling cheap, especially whenever the ghost materializes. Also really dug how much haunted house lore was incorporated into the plot, from certain rooms feeling cold and palpably sad, to a bouquet of flowers wilting instantaneously, to a certain scent wafting in and out to signal the ghost’s presence. Though you see little and feel even less, everything is set up in such a way to convey Windward’s otherworldly nature, and that’s something that’s hard to do even now, let alone in a film from 70 years ago.