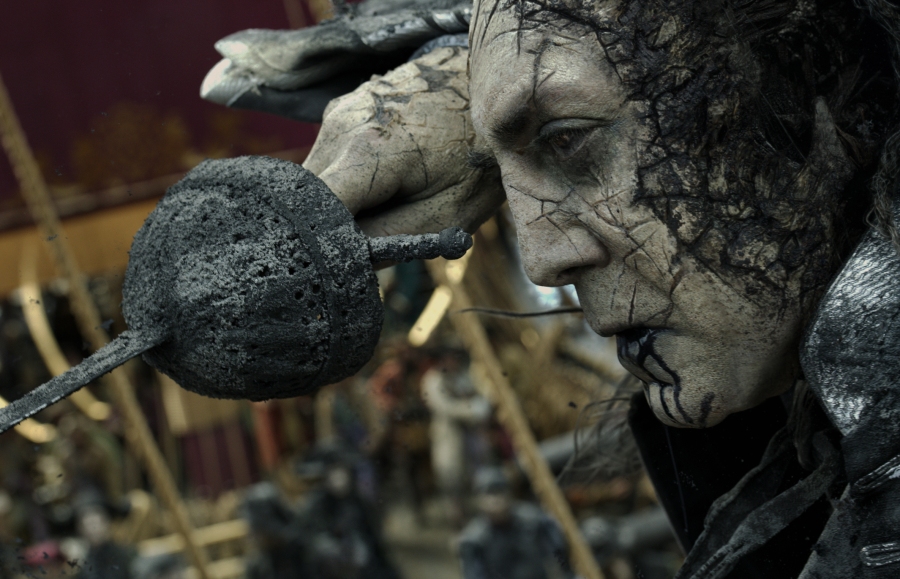 Like many franchises, Pirates of the Caribbean should have walked the plank after its third entry—and even then, it had already overstayed its welcome. Dead Men Tell No Tales is the fifth film in the series (the first after a six-year hiatus), and God knows if it’ll be the last, since it’s become such a cash cow. But truly, there is no more milk to be got: this one is already drifting on choppy waters, with a script as formulaic and knotty as they come. And bloated—I mean, you’d need more than two hands to count the number of characters who could have been tossed without being missed from the plot. But no, the name of the game is bombast and excess, and DMTNT (ugh, even the title is too long) has got it in spades. I’m writing this with a ghost of a headache coming on, which should tell you something.

Poor Javier Bardem, trying his best to make something out of nothing in the role of a villain as scary as a blade of grass. Poor Geoffrey Rush, trying his best not to walk off the set in search of roles more suited to his talent. Poor this and that, but it’s difficult to extend sympathy towards Johnny Depp, who has become a mere shadow of what he used to be. Here, it’s clear that he’s going through the motions (and the less said about the de-aging CGI work in that one scene, the better). The young ones, Brenton Thwaites and Kaya Scodelario, are fine, but they’re not as engaging as Orlando Bloom and Keira Knightley used to be.

Interestingly enough, I wouldn’t call this a terrible film—most of the special effects are decently done, and what little humour there is isn’t too bad. And, for what it’s worth, it moves along at a steady pace, despite being too long in the end. So I wasn’t exactly bored by this, although in a way, it attacks you on every front so that you’re more or less forced to put up with it.

If I were you, I would watch something else and not put up with it.