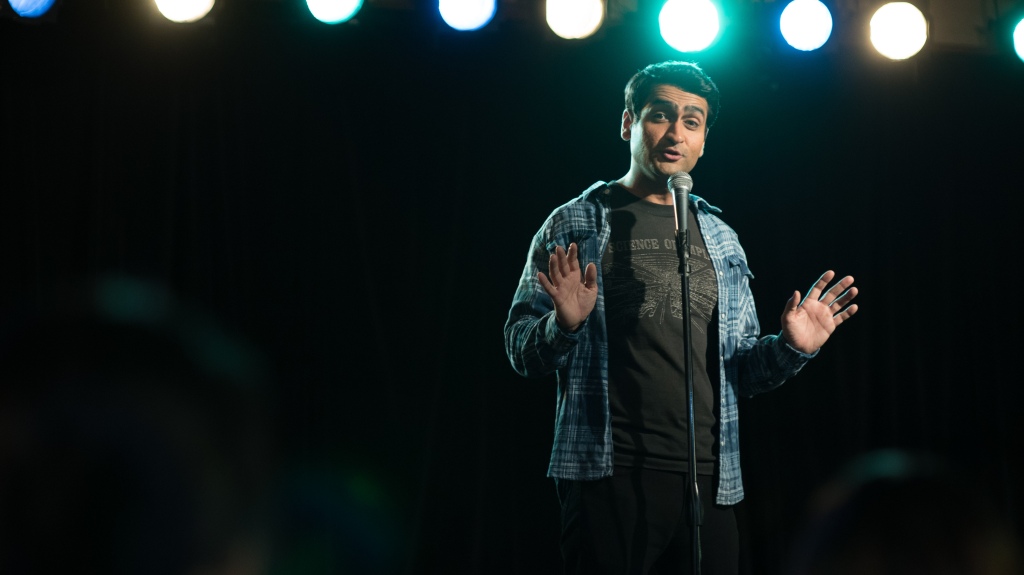 The Big Sick will not win any awards for its direction or style. And I’ll admit that that bothered me for the first half hour or so. It’s not an interesting film to look at, and Michael Showalter doesn’t seem to try giving it a boost in that area. It was also playing out very predictably, with Kumail Nanjiani (playing himself) meeting a woman during a standup gig, and the two hitting it off well. Zoe Kazan, who plays Emily Gardner, is a charming presence, and her rapport with Nanjiani is strong. There are also scenes with his Pakistani family that provide a slice of his devout culture and their strict adherence to arranged marriages, with his mother adorably inviting eligible girls over and pretending they were just “dropping in.” Understandably, he chooses not to say anything about this to Emily (and vice versa), since Pakistanis forbid so-called “love marriages.” But she finds out anyway, and doesn’t take the news well. At this point, you can feel this is going to be one of those culture clash stories, where differing customs collide and the ramifications must be rectified.

But the title is The Big Sick (a title which I still dislike, because it sounds like it was pulled from a children’s book). There is sickness. Emily is suddenly hospitalized with a massive infection, and her prognosis is uncertain. It’s about here that the movie begins to win me over. Kumail meets Emily’s anxious parents from North Carolina, Terry and Beth, and at first they’re kind of hostile—particularly Beth. But it’s not because of Kumail’s heritage. They know about the breakup and his lack of disclosure, and can’t trust him. Kumail has to earn it, and he does. Terry’s first, and then, a little later, Beth’s. These scenes play out effortlessly, and I suspect it’s because Holly Hunter and Ray Romano swoop in to provide anchorage. There’s kinesis and synergy when they interact with Nanjiani. That’s why I can’t get enough of the scene in Emily’s apartment, where Kumail and Beth bond over a bottle of wine. It’s so normal, yet so… understatedly beautiful. Because we see two likeminded people toss away their inhibitions and become closer.

As The Big Sick trucks on, its initial predictability wanes. It doesn’t pander to our desire for closure and quick reconciliation. Kumail isn’t given a free pass simply because was constantly at Emily’s bedside. His family doesn’t give him a free pass for wanting a different life. Terry doesn’t get a free pass for betraying Beth in a moment of weakness. No one’s arc is tied up in a perfect bow. Somehow, it’s more moving that way, when our wishes are directly juxtaposed with the complexities of being human. It’s hard not to cry when Beth looks at Kumail like a mother at her son immediately after he is rebuffed by Emily. There is something in that ungainly mixture of gratification and denial that makes The Big Sick work so well in its latter half. If it does not begin on the strongest of legs, it makes sure to have its ending count.