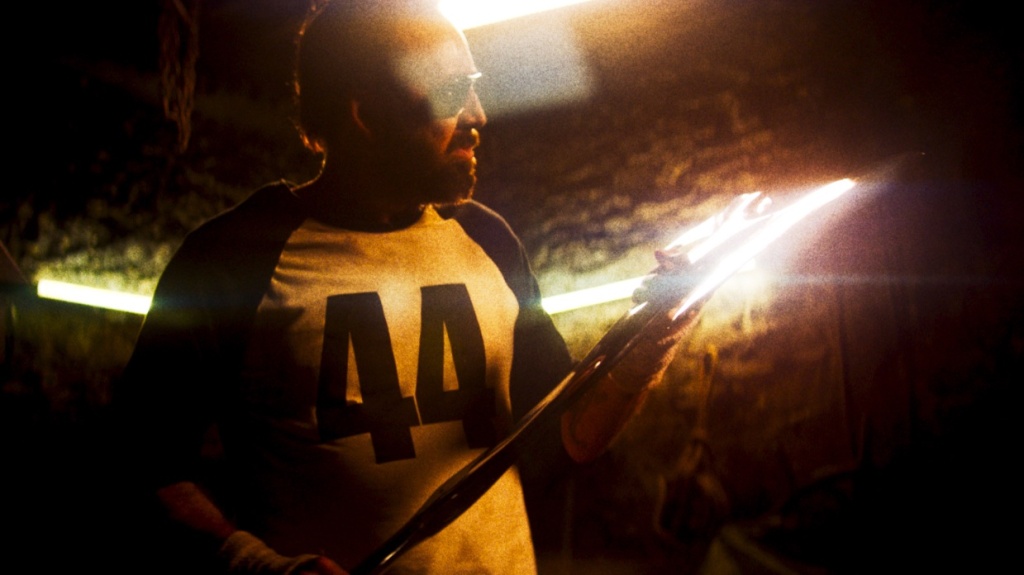 Let’s start off with the good. Panos Cosmatos knows exactly the kind of aesthetic he wants to project, which is a psychedelic, deep-toned phantasmagoria. It’s perfect for stoners and those who like their films vividly rendered, and it’s an aesthetic that he can probably utilize again without it becoming too tiresome. Mandy is also another effective vehicle for Nicolas Cage, who digs into the stylized nightmare of it all with relish, and yet surprisingly doesn’t overplay his hand. The emotional fabric of this particular performance makes a lot of sense. And there’s something eminently satisfying about Cage running amok and doling out some violent vengeance. It’s the film’s main draw, and it’s a fun one! Even if it only comes after the sixty-minute mark, which for some may be too late.

Now for the bad. I feel Cosmatos’ style gets the better of him with this one, to the point where it melds together like flowing molasses. There’s nothing truly interesting about his choices; for instance, he devotes almost half an hour to set the scene, and another thirty minutes to build the climax, but after all is said and done, there is still nothing particularly noteworthy about the people he’s chronicling. They are, at best, precisely the kind of people we initially make them out to be. And so we only have their interpersonal relationships to care about. This is especially true of Mandy herself. Andrea Riseborough does as much as she can to give the character a distinguishable life and past, but her efforts seem wasted in the grand scheme of the film’s design. She is at her most important through her relationship with Cage’s Red—and that’s a bit problematic. What would’ve been fun is if Cosmatos reversed their roles, and made Riseborough the axe-toting badass we wanted her to be.

The focus on cults is also old hat, even if Linus Roache gets to have some fun as the sadistic leader. Films about cults are made quite often, so if they want to stand out, they need to have something interesting to say. Mandy uses its cult like a crutch, introducing it only to be Cage’s antagonist without trying to contextualize its psychology, beliefs and motivations. And that ends up going back to the fact that Cosmatos, at the end of the day, seems to care more about grading his scenes magenta instead of making his characters come alive in truly unique ways. It makes Mandy so much more tedious than it ought to be. And if you don’t believe me, I’ll freely admit that it put me to sleep for a good half an hour.

Let’s just give Riseborough the Shelley Duvall biopic she deserves and call it a day.