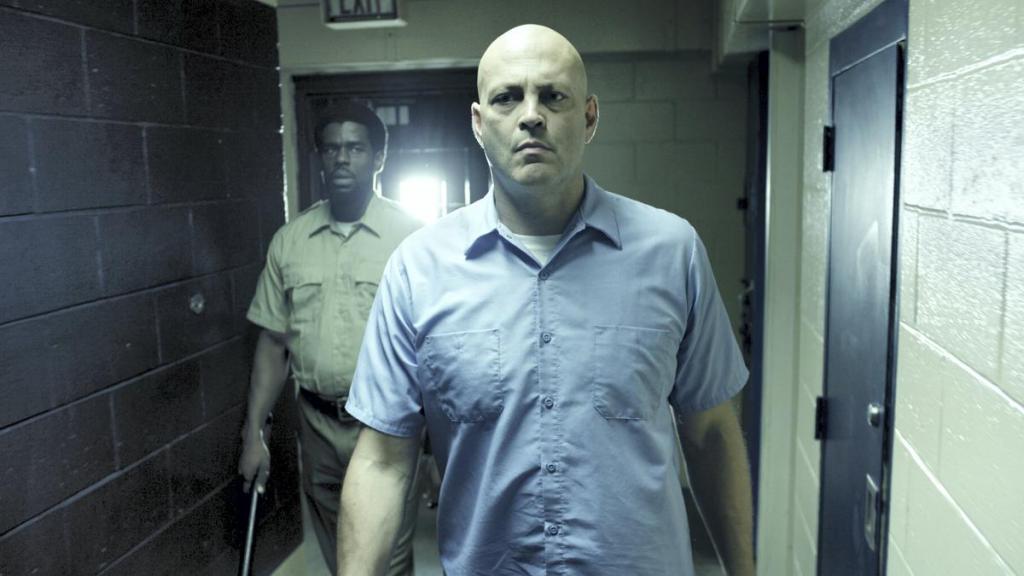 Within the first ten minutes or so of Brawl in Cell Block 99, Bradley Thomas (Vince Vaughn) angrily dismantles his wife’s car after learning of her infidelity. Nearly two hours later, the guy drags a baddie face-first across a cement floor using his foot. When the man is turned right side up, all the flesh on his face is gone, leaving only his pallid skull (and he’s still fucking alive). These are just some of the “delights” that S. Craig Zahler has to offer us. I’m still not sure I was receptive to all of them—some of them came too close to needlessly gratuitous for me—yet I physically stood up and whispered a hefty “OHHHHHHHHHH” a few times, so I guess it all evens out in the end?

This film as a whole is so odd, composed mostly in a muted palette and featuring a story that only kicks into high gear after one slowburn of an hour. Vaughn’s character is a hulking mass of politeness (but only if you don’t screw him over) who has to act psychotic and put himself through the ringer to save his wife and unborn child from a diabolical scheme that seems like it came from a third-rate James Bond knockoff. Maybe he is a little psychotic? We do know that he has the physicality to snap an arm like a twig. And decapitate someone by stomping on their throat a few times. The world sure is a swell place when you have Zahler calling the shots, with menacing prisons that have torture belts and shards of broken glass for you to fall on top of.

I don’t even know if I liked this film, or if I’m just impressed by how well Zahler wraps the coils of grindhouse brutality around his fingers, giving it to us in measured drams before throwing caution to the wind. It’s an experience that vacillates wildly between electricity and monotony, never excelling completely, yet always delivering a thrill or a shock right before you think you’ve had enough. It mostly works, and for a pulpy good time, you could do worse! This also gets some brownie points for having Udo Kier play a nameless villain known only as “The Placid Man.” And, as advertised, Mr. Kier delivers a performance that can only be described as “placid as fuck.”

I’ll always love me some Udo.