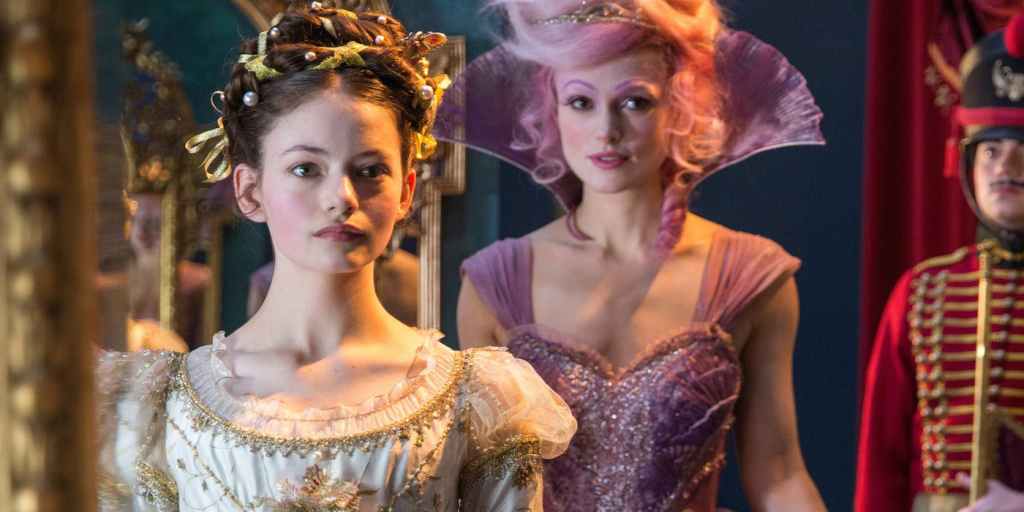 I’m not sure who asked for Disney to take The Nutcracker and its lore, dunk it in soul-numbing shellac, and turn it into a tedious fantasia for the holiday season. The ballet is still there, people! Apparently the magic of dance is not enough these days, so we have to add silly conflicts, barely-developed geographies, and hackneyed symbolism to keep the kids awake. And they will be awake, if only for the syrupy CGI and cute little mice that pop in every so often to wriggle their ears. Adults hoping to be whisked away to the beat of Tchaikovsky’s music will be in for a rude awakening when they realize the masterful score is used haphazardly, with only one measly balletic interlude to signify that, yes, the writers are thankful for their sources. The characters’ names are familiar, as are some minor details, but much of this seems descended from garish flops like Tim Burton’s Alice in Wonderland or failed franchises like The Chronicles of Narnia and His Dark Materials. Like those films, this is all about a child being transported into another world, with fanciful creatures and dreamy landscapes, and having to find “the power within her” to defeat the evil force threatening everyone’s livelihood. And, as in those films, her real world is rife with familial tragedies and lingering resentments.

The formula feels especially suffocating when applied to this story, which is renowned for its simplicity and careful consideration of its audience’s imagination. Here, imagination is left at the theatre door, and the story is bulked up without care of logic or proportion. Nothing feels right or balanced, and any meditation on, say, grief or inheritance is lost amidst a flurry of irrelevancies. The film’s greatest asset may really be a manic Keira Knightley, who plays the Sugar Plum Fairy like a deranged Betty Boop, all cooing intonations and airy giggles. It’s not a very good performance by any stretch of the imagination (there are, unfortunately, no good performances in this film), but it’s the only one that suits the fanciful grotesquerie around it. Only she seems to understand the quality of the film she’s in, and so takes the liberty of chewing all of the scenery (and her candy floss hairdo). It only “works” because everything else is so drained of power, and without her, I think I would’ve drifted off to sleep.

Normally, I would walk away with my hands in the air, freely admitting that I’m not the intended audience for a film like this. With this one, though, I feel obligated to forgo that and tell you honestly that it’s not worth capitulating to. This kind of hollow, commercialized gaudiness is doing children a major disservice, because it possesses nothing resembling a soul. It’s not helping build their emotional selfhoods, or giving them the tools needed to grow into sound and sensible adults. It’s just pandering to the basest of sensory pleasures, and when you compare this to one of the classic Nutcracker tales, you know you can much better than that. Buy tickets to your local dance company’s production of this story, instead. Treat your family to the real deal, and leave this imposter behind.