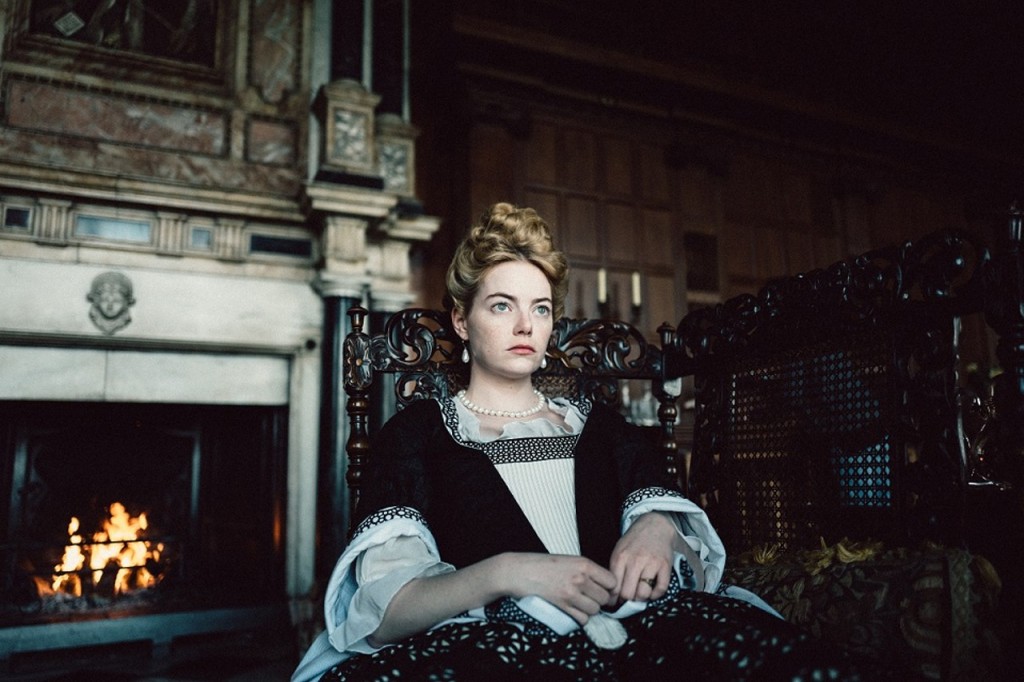 I can’t say I was absolutely loving Yorgos Lanthimos’ latest curio about twenty minutes in. A lot is established very quickly, and Lanthimos seems to jump right into his trademark weirdness rather than let it simmer over. For instance, I thought putting the duck race in the first act, when the tone hasn’t been quite set, was a mistake. It’s a choice bit of buffoonery that would’ve gotten more robust laughs when all the major players had eased into their roles, and it was clear that the men were going to be mercilessly mocked all the way through. The ducks are a brilliant gag that shouldn’t have been used up so hastily. I also felt Abigail’s entrance was too rushed. I would’ve liked to spend more time with Anne and Sarah as they solidified their curious relationship. Anne’s helpless dependency and Sarah’s conniving machinations yield such potent comedy, especially in the wordplay and Sarah’s arch affect. To luxuriate in this pairing would’ve served the audience better when Abigail comes along and upends it completely. That way you can really feel the change occur, and how Abigail’s foreign aura invades the established atmosphere in the court. Lanthimos gives us half a sense at most. He also takes the easier route and simply gives Stone more prominence when she’s introduced, while Weisz is ever so slowly pushed to the sidelines. It’s a bit unfair to the latter, for the film should ideally revolve around three co-leads. With Weisz being given less to do, the equation is only fit for two co-leads, and a very strong supporting turn.

However, some of my initial misgivings dissolved away an hour in. Once comfortably ensconced in the general tone and environment, the film is devilishly wonderful. There’s a psychological component regarding our innate drive for validation that Lanthimos convincingly extrapolates through his off-kilter direction, skewing perspectives so that the characters strive to set it aright. The need to curry favour is not merely a political one, we come to learn, but one very much linked to a desire to be worth something more than just the clothes on your back. The film is also generous towards Anne’s perspective, which is a tangled heap of monarchical and libidinal impulses that she can only resolve through indolence and instant gratification. If she is grotesque (apart from her physical ailments), it is because she does not know how to fully counterbalance the crown on her head and the longing in her heart for simple companionship. Olivia Colman understands this, and delivers us something extraordinary as a result. Her Anne is feisty, slapstick, petulant, and deeply tragic—a compendium of loss and a fear of becoming lost. She is, in a word, masterful.

Stone and Weisz are fabulous, too, digging into the core of their ambitious characters in ways we haven’t seen them do before. Weisz is a flint that cuts, but she is also one that cuts herself when her hold on power begins to weaken. Stone unleashes a fine display of physical comedy and savagery that suitably upends her Girl Next Door image, until what remains is scorching villainy that is delectable through and through. In terms of the men, Nicholas Hoult, as a flamboyant politician, makes every minute of screentime count, while Taylor Swift’s beau Joe Alwyn dances into our hearts. The ensemble is one of the best of the year for these things. It’s also one of the best because every single actor is capable of navigating Lanthimos’ unique sense of tone when he commands it. No one performance exists on a single register. They all embody this story’s particular horrors, hang-ups, and larks without missing any beats, shifting with ample dexterity.

For the first twenty minutes, I was worried. When the credits rolled, I was converted. Unlike some, I have never been a Lanthimos hater. I may not love all his films, but I will never pass up the opportunity to take in his strangeness. The Favourite is proof that he continues to harness it in exciting ways. What, on paper, could have been a fussy costume piece becomes a biting torrent of regal ferocity in his capable hands. If he can successfully turn a period drama on its head, what can’t he do?