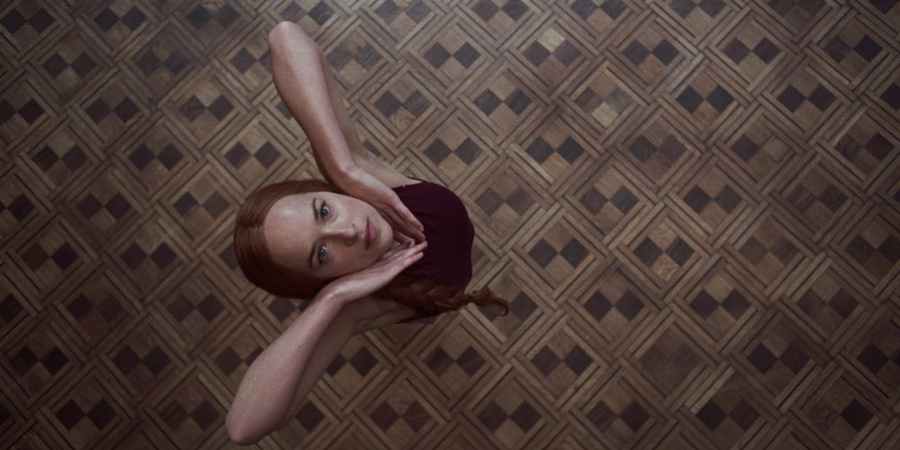 A bit of a disclaimer: I am not an Argento purist, so a reimagining of Suspiria was never going to drive me up the wall. I’ve only seen the original once, and that was but a month ago. I am about as new to this mythology as you can be, which allowed me to walk into Guadagnino’s film without any predisposition to judge. This was a good call, as this version is only tangentially connected to the original. The setting, the setup, and some of the characters remain the same; everything else is expanded, altered, and given new subtext. The oversaturated colors have given way to faded burgundy tones, and we’re now driven headfirst into the turbulence of the German Autumn in 1977. A new generation of Germans are trying to wrestle with the demons of Nazism and the Holocaust, the relics of which are still active in segments of society. Radical activism turns deadly, and the news is riddled with tales of kidnappings and bombs. In the midst of all this, an American girl named Susie Bannion (Dakota Johnson) arrives in West Berlin to train at the Markos Dance Academy, whose current director, Madame Blanc (Tilda Swinton), may or may not be leading a coven of witches. Such is the fear espoused by one student, Patricia Hingle (Chloë Grace Moretz), when she visits her elderly psychotherapist, Dr. Josef Klemperer (Swinton again, wearing unrecognizable prosthetics). Susie, of course, knows nothing about this, and her audition catches Madame Blanc’s eye. In no time at all, Susie becomes Blanc’s chosen muse—and, maybe, her next victim. Cue up the ominous music!

There’s quite a lot to admire about Guadagnino’s interpretation, such as how the coven storyline runs contiguously with the sociopolitical elements he introduces to show how great the tension was between the wartime and postwar generations. The power imbalances and misplaced allegiances continued to threaten the German effort to completely rebuild itself from its hateful past, which was further hampered by Nazis who still occupied positions of high power. The matriarchal coven here is the microcosm of the patriarchal German identity, and the putrid presence of Helena Markos symbolizes the extent of the corruption still being perpetrated. Due to this added parallelism, Guadagnino had to completely retool Susie’s role, and what she becomes in his version fits nicely with the grand picture he’s painting. To keep her as the Snow White figure from Argento, always asleep and passive, makes no sense when this interpretation is awash in upheavals. There is a need for the young to physically confront the old, and not only that, but to demolish it. To face it down and disempower it, so that its evils can no longer taint the future. I suppose the caveat here is that there is no guarantee that the new blood will abstain from their predecessors’ corrupt practices, but hey, the hope of positive change can do a lot to repair the damage. It is, at the very least, a start, and where it goes from there can be the basis of another film (hopefully).

Guadagnino is less successful dealing with benign bystanders like Klemperer, who were not evil but made no efforts to prevent the atrocities when they occurred. Klemperer’s role is largely unsatisfying, because the filmic space he occupies is at a remove from the more incendiary generational conflicts going on at the academy. He is merely someone to be put in his place, especially for holding some misogynistic views about women despite his own wife’s disappearance. His role of witness and guilt-bearer is very pat in a way the rest of the film isn’t, and so one has to regard his inclusion as something of a noble failure on Guadagnino’s part. A well-intentioned move to keep the spectrum broad, but an incidental element to an already brimming pot. Having Swinton play him also has an air of gimmickry to it, since her transformation is not entirely convincing. The idea to have the only significant male character played by a woman is, again, a noble one, yet the justifications are tenuous.

Also tenuous are some of Guadagnino’s more excessive choices, such as a finale that leaves nothing to the imagination in the same chaotic way that closed out Darren Aronofsky’s mother! The level of insinuation that Argento carefully cultivates is also largely missing in this iteration, and in some moments, it’s missed. It would have softened the film’s self-serious tone and given the audience a little more room to breathe during the lengthy runtime. Sometimes being too pointed can work against you, and in parts, it does so here. Even so, it can’t help but get under your skin, repositioning an old favorite within a new framework and seeing how these added elements can freshen up what was, by and large, a pitch-black fairy tale done up in giallo colors. A lot of people have already refused this, calling it wasted potential and time. I’m not ready to go that far, even if I come out still preferring the compact simplicity of Argento’s take. This Suspiria still has legs to dance on.