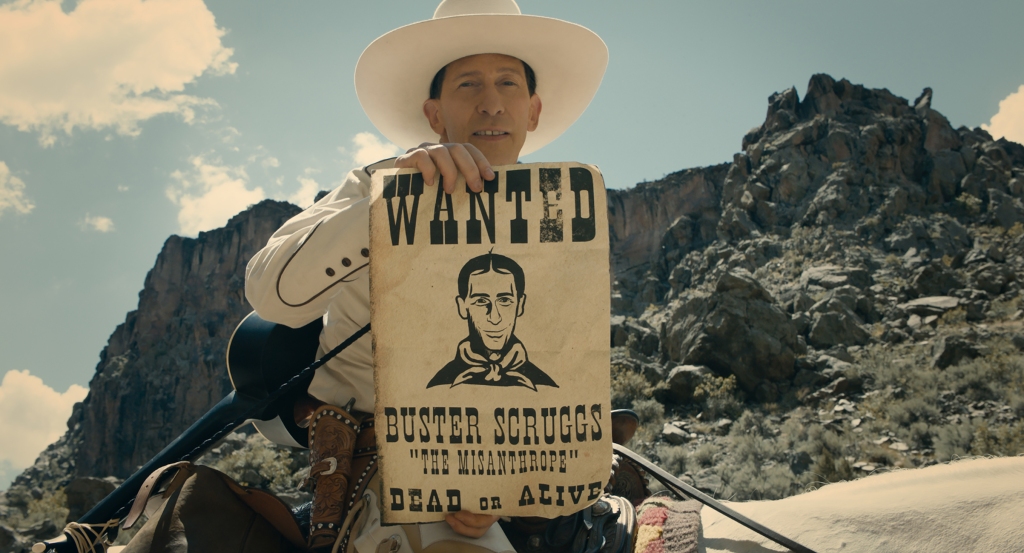 The Coens’ hot streak continues—and rather surprisingly at that—with The Ballad of Buster Scruggs, an anthology of six Western-style shorts that are bridged only by their stunningly-rendered vistas and grim depictions of mortality and isolation. I say “surprisingly” because anthology films are a risky undertaking in general, as the shorts therein can vary wildly in quality. A total knockout can be followed by a disappointing wisp of failure, and somehow you have to reckon with it. Somehow you have to average out the great and the bad, and see where the entirety of the piece falls on the whole. Fortunately, the Coens are such steady hands by now that even their most uneven efforts possess sufficient merit, as is the case here. Even the weakest segment of Buster Scruggs manages to captivate in its own way, and inform the entire piece’s preoccupation with such things as fading myths, death, changing landscapes, and individual belief systems. If it’s weak, it’s because it’s either too long, or too slight in terms of narrative. And even those factors can be generously debated, seeing as the individual rankings of these stories vary from individual to individual. It’s all about what you personally take away from the presentation, and the fact that everyone has different opinions means that no story here lacks insight.

For instance, I’m personally quite fond of the third story, “Meal Ticket,” which may be the oddest of the six due to its focus on a limbless man (Harry Melling) being carted around remote towns and giving dramatic recitations of famous poems and speeches. There is an immediate disjunction between the culture Melling’s artist wishes to spread, and the dwindling enthusiasm he receives as time marches on. The segment further ruminates on Melling’s place in this desolate world, where he is rendered immobile and dependent on a man he does not altogether trust (Liam Neeson), and where he can only speak the words of others. What dawns on him in a very brief moment is the fact that, while he must speak these words for his own physical sustenance, he can also speak them to understand his own existential quandaries. They no longer need be a part of a polished performance, but a lifeline to an expression of his previously unarticulated pains. Tragically, his articulation comes too late for anyone to care. In an unforgiving wilderness, apathy can be even deadlier than starvation. At the very least, Melling’s art and his interior world are able to meet, and he can enter the next world without having left it unexpressed.

In every story, at least one character leaves the world due to violence, as is the Coens’ wont. Undignified deaths grace the screen without gracing our hearts, as they leave nothing but voids and ellipses. Wasted opportunities abound. However, the Coens do not necessarily make the passage into the next life necessarily dark. Those who pass are given the chance to leave something behind, whether it is a song or a loving moment of admiration. The vast expanse of the Wild West does not prevent those who pass on from being forgotten, and the way their marks are left inscribed within this mythos makes this a film of great philosophical import. And, in the typical Coen fashion, the humour and wit is kept in lockstep with this weighty matter, so that none of the script’s quality is lost or obfuscated. What appears trim and minor builds out to become another sterling achievement in the careers of these two American masters.