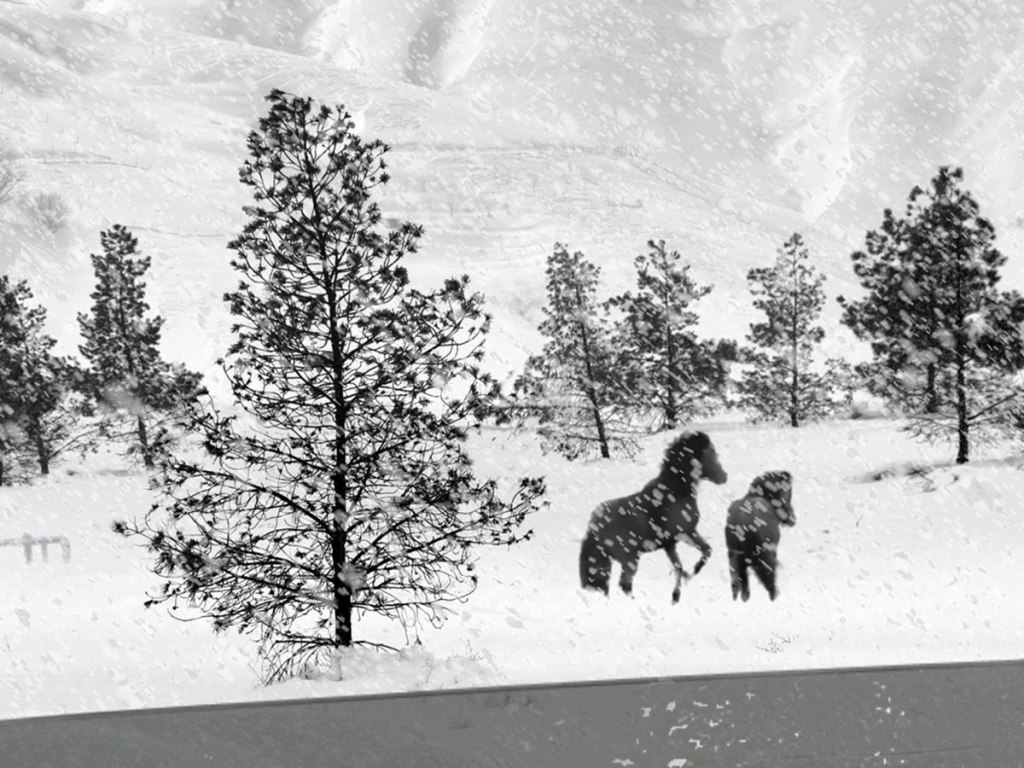 Abbas Kiarostami left the world with an unusual goodbye. Not a narrative film, or a film of particular grandeur. Not a film that took us through his beloved Iran, meeting new faces and treading new terrains. No. He left us a film that is experimental in nature, best described as watching pictures come alive in the temporal space between life and a solitary snapshot. It is, in one sense, an essay film of a kind, because Kiarostami is positing a certain “beforeness” in the period of existence prior to the camerawoman’s arrival. The camerawoman does not know what this “beforeness” is. She cannot know, because she can only capture what meets her senses in the immediate moment. By re-animating a selection of his photographs, Kiarostami is using cinema to bridge the gap of the “beforeness” and the photographic image. He is trying to read the past through the contents of these pictures and find the kinesis that drove the wildlife that populate them. Frisky horses, lazing bovines, vigilant deer, inquisitive birds—an order of magnitude and possibility, subtly spinning secret narratives that we’re frequently oblivious to. Not Kiarostami. The natural world for him is as rife with potential as the human condition. Even in the photographs, the animals can tell a tale. He is their scribe.

The brilliant thing about his method is that, barring a few choice exceptions, the original image is never revealed. We do not know at what point he clicked his shutter. The true frames that exist as negatives are like phantoms hidden behind Kiarostami’s manipulations, simultaneously there and not there. He trusts us to imagine where they might be, and if we cannot, no matter. He leaves it for us to decide when we would have taken the photo. Which spatial arrangement yields the most pleasing visual tableau? Which configuration of beast or bird strikes us as the most beautiful? The most artful? We are invited to be active participants in this film’s creation, making it somewhat disconcerting that people would find this deathly boring. I’d imagine it would be boring if you choose not to engage, construct, admire or evaluate. This has been true of Kiarostami’s oeuvre as a whole, and it’s no different here. This time, the onus is much more on the viewer to find that balance of engagement and elucidation, and yes, it does not come easy. Nothing ever does.

The other feature I find stunning is the control exhibited in the digital effects, and how Kiarostami frequently oscillates from making them truly lifelike, to revealing their uncanniness in subtle shifts. For instance, many of the vignettes have digital snow superimposed on them, giving off an effect similar to Christmas e-cards you can send on the Internet. But then some animals really do move as they would in real life, and there are also changes in lighting that are so natural that you hardly notice them at first. It’s a wonderful mixture that trains the eye to adapt to unique conditions, much like how a camerawoman must do the same for every environment she photographs in.

Finally, I can’t help but be tickled by Kiarostami’s final film ending with an Andrew Lloyd Webber song. It’s the weirdest flex I’ve seen in film this year, and I’m not really sure what to make of it, other than to say that it fits? If Kiarostami did choose the track, then it’s true. His love never will die, even though he has. 24 Frames is a testament to that. His love for cinema was still as vibrant and adventurous as ever, and in a way, this film is how he is passing the torch to us. Training our eye, making us look, experimenting with technology and form—it’s all there. He’s left it for us. It’s the perfect farewell.