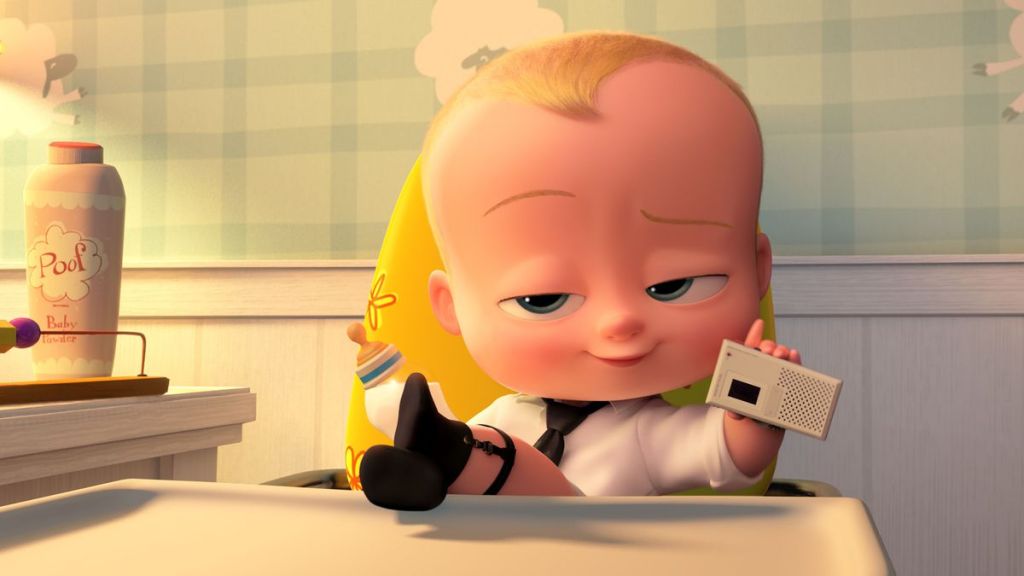 There’s a clever concept here. The story has an anti-capitalist bent, revealing the exhausting impact of mass commoditization and empty corporate hierarchies. In such a culture, there is no time—nay, no room for the nuclear family, and what is sacrificed is love for speedy profit and gain. The human touch replaced by the synthetic, marketed decoy (new technology, a corner office with a private bathroom, etc.) that is unable to replicate the filial connection. The Boss Baby makes analogous to this capitalist ennui the displacing effect that occurs when an only child suddenly becomes the sibling to a younger version of themselves: a version that, like the commodity of disaffected labour, threatens to subsume what has come before. The now eldest child is forced to upend the commodity’s influence to return to when they were the novel product, but they quickly find that returning to such a past is futile. The novel product is here to stay, and the only way to combat its deleterious effects is to reduce the novelty: ergo, make the boss baby, with his corporate lingo and slick suit, a normal baby that goes “goo-goo-ga-ga” and laughs at vibrant stimuli.

This is a fairly productive way of reading this film. Is it what the makers of The Boss Baby were aiming for? Eh, I don’t think so. The sly adult humour would be more polished, the animation less garish, the story deeper than the cat-and-mouse game it devolves into. To really attract the sensibilities of the adults bringing their kids to this, the creators would have done well to tighten the bolts on this one, because parts of it feel completely adult-averse, while others have that knowing wink that sophisticated animations do. There are times where you really want it to be that special hybrid, and you can see it almost pulling it off. And then, a few seconds later, there’s a creative decision made to appeal solely to the youngest demographic while making the adult’s head reel. You are torn between wanting it to end and wanting to see how far it can go—only, it doesn’t go far enough in the end. One has to really scrabble through the disparate parts to find most of the value, while the kids (as always) will really love the usual tricks: the bright colours, neat sojourns from the standard CGI, and Alec Baldwin’s smart alec voice work (which is, expectedly, pretty dang great).

I can understand the Oscar nomination… I think. Last year was a weak one for animated films, and this one is built around an intelligent framework. Not executed as intelligently as it could have been, mind you, but I can see how it impressed enough voters to make the final five.