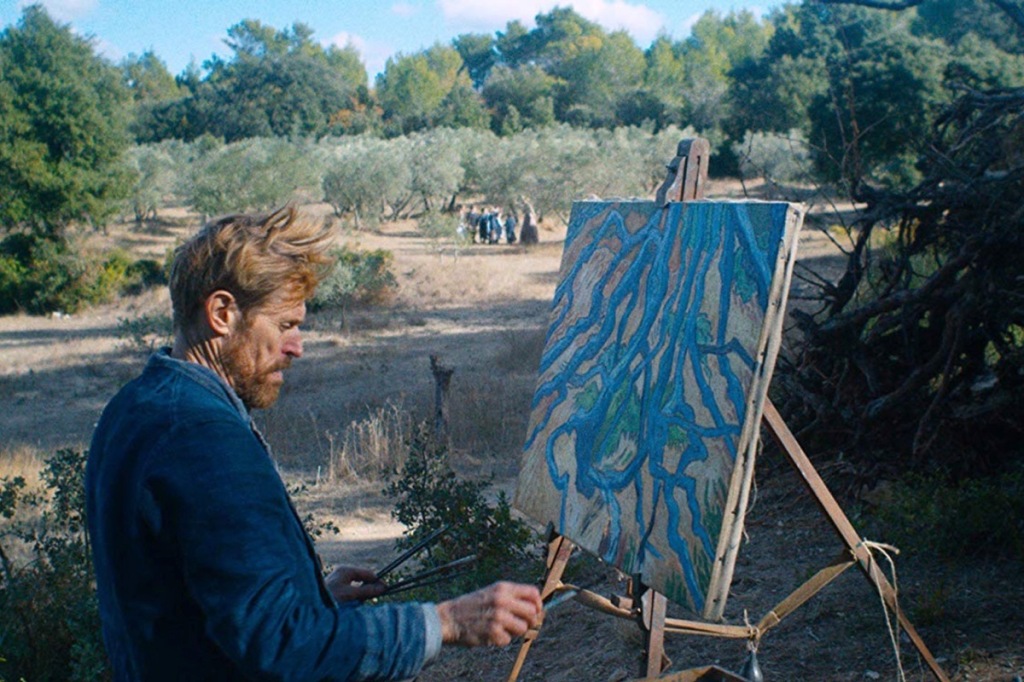 Another year, another Vincent van Gogh film. Hot on the heels of last year’s Loving Vincent (a film animated in the style of van Gogh’s paintings), At Eternity’s Gate looks at the final years of the artist’s short life, when he moved to the small villages of Arles and Auvers sur-Oise to paint the natural landscapes. It was in Arles where he infamously cut off his ear after an argument with Paul Gauguin, and it was in Auvers where he died under mysterious circumstances. Like Loving Vincent, Schnabel’s film chooses to side with the recent theory that two schoolboys shot van Gogh by accident, rather than going along with the more popular theory that he committed suicide. An interesting move, considering how ardently this film tries to plumb the man’s interiority and explore his philosophies on life and art. One would think that, for all the times van Gogh’s art is criticized as ugly or unseemly, the suicide theory would work better. An unappreciated artist realizes he was born too early for people to recognize his talents and kills himself in a fit of depression. Why not? Instead, Schnabel takes the accidental death theory and uses it to his advantage, martyring him instead of having him commit a great sin unto himself. It elevates van Gogh even further than perhaps he ought to be elevated. One can be a genius in art and still be greatly flawed.

This is the trouble with the film. It comes off as hagiographic, tamping down van Gogh’s dark side so that he can fill out the “tortured artist” trope to the letter. Schnabel plays up his dissociative mental illness with a lot of aural and editorial trickery, trying to pin most of van Gogh’s faults on his deteriorating mental state; the rest of the time, he casts him as a kind of wizened prophet who communes with the natural world and calmly philosophizes to all who will listen. Now, I can believe he was misunderstood by others, that he had a good heart, and that he was very intelligent. I don’t buy the idea that he was some Christlike pariah who only did wrong because of his illness. That is simplifying things far too much for my liking. And what it also does is puts van Gogh at even greater distance from us than he already is. A man who was already an outcast in life shouldn’t be put at a farther remove in death. I hate to say it, but at least Loving Vincent knew how to accept his flaws and still make him a man we could mourn for. Schnabel insists that we venerate him, without making a strong case for such an action.

To make things worse, Schnabel’s artistic sensibilities here come off as laughably overwrought. All the shaky handheld camera work and gratuitous close-ups are a nuisance to deal with when a more sedate approach would have been more profound. At the very least, Willem Dafoe is very good, making a valiant effort to understand van Gogh’s perspective. His age is also not as much of an issue as I thought it would be. It’s only when he’s sharing scenes with the much younger Rupert Friend that the discrepancy becomes apparent. You know what, though? Considering Dafoe’s resemblance to the artist, it’s probably a good thing someone capitalized on it before it was too late. Nor do I think another actor could have done a better job.