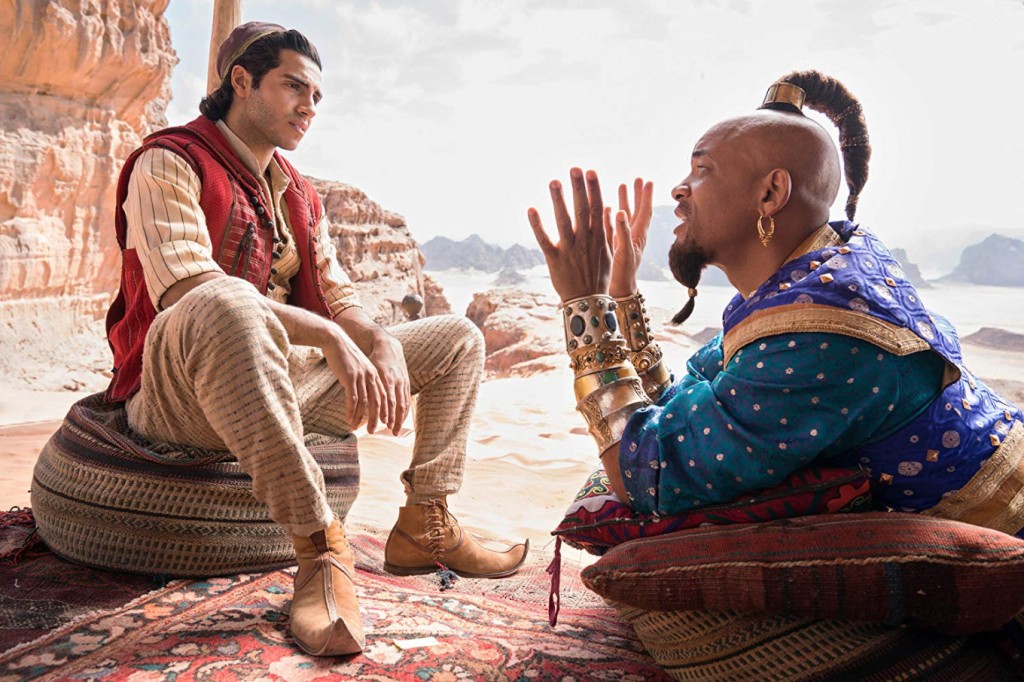 It is quite the relief when a movie that has been beleaguered with terrible promotion turns out to be better than expected. And let me tell you, Guy Ritchie’s Aladdin instilled no confidence before its release date. When Will Smith’s buff and blue Genie was finally unveiled to a flurry of online backlash and mockery, I couldn’t fathom how this venture would recover. Then select clips from the film were released, such as the “Prince Ali” musical number, and reactions did not improve. If anything, more people seemed to run for cover, anticipating the worst live-action Disney remake to date. So maybe, in a completely inadvertent way, the marketing team behind this one earned their paycheques, because they helped lower expectations so much that they ended up underselling the finished product. This is not the unmitigated disaster most people were preparing themselves for. It is, by and large, an entertaining companion to the original animated film, with Ritchie elevating the material just enough to make the effort worthwhile (as opposed to solely a tired cash grab). His knack for turning action and impetus into its own spectacle serves this tale well, since it’s filled with fast-moving parts and dynamic set pieces that require experienced guidance. He’s able to capitalize on these aspects and lend panache where otherwise there would be wooden recreation (a flaw that sank the live-action Beauty and the Beast). It’s fortunate, too, that the casting is largely a boon: Mena Massoud is a charming lead and Naomi Scott even better as a more outspoken and spirited Princess Jasmine. Will Smith, tasked with following in the shadow of the late Robin Williams, invests the Genie with a surfeit of his own personality, giving us the chance to appreciate a new take on an old favourite. And while the character design is still iffy, it’s not as distracting as the promo materials made it out to be. In fact, the only casting misstep is Marwan Kenzari as Jafar, who lacks the original’s intimidating aura and serpentine delivery, perhaps even underplaying the role’s camp value. It’s fortunate that he’s competent enough in the part not to derail the proceedings.

There is bloat, as has been the case with every live-action remake thus far. Jasmine, for instance, is saddled with an unimaginative new song about feminist empowerment that comes across as a watered-down reject from Frozen. The ideas it espouses are great, but the package does not compare to Alan Menken’s original tracks. In fact, I’d venture to say the musical numbers in this are largely extraneous and only exist here for sentimental value. Ritchie does not seem especially invested in pulling out the stops for them, staging them lackadaisically and without too much grandiosity (particularly “A Whole New World,” which is not the sweeping and majestic showstopper as one would hope). The film would have been better had Ritchie followed Kenneth Branagh’s lead for Cinderella and ditched them entirely, though of course that wasn’t his call to make. At the very least, the musical parts do not drag or take on the soullessly uninspired waxiness that beleaguered Beauty and the Beast (I know I’m dragging that film a lot, but it really is an example of how not to go about these things). Will Smith’s renditions are distinct enough to keep obsessive comparisons to a minimum, while Massoud and Scott are good enough to put their own stamp on the material.

If the musical numbers are not quite to the standard of the original, I have to say that the rest of this nearly matches the sense of enjoyment I got from watching the animated version as a young kid. It’s not trapped in a deathly boring and hollow veneer, nor does it zap out all the story’s inherent likability and personality. I’m still largely against these projects because the only reason they exist is to capitalize on our sense of nostalgia and make people fork out money for products that are marketed for their very lack of originality. The House of Disney is trying to give itself a sparkling renovation using old material, but it must know that it’s not going to make magic happen twice, and that if it does make magic happen at all, it would have to be from more obscure or flawed properties. Aladdin may be the closest remake we get that is a tolerable compromise between nostalgia and modernity that doesn’t make you want to run to your old VHS collection to erase the memory of your recent screening. It has sturdy legs to stand on, and so I’m inclined to be more generous than I ought to. But I know that the next remake I watch will be bad, and I’ll have to rehash the same points I made for Beauty and the Beast and Dumbo. Disney’s not putting this genie back in the bottle, so we’ll have to content ourselves that Aladdin exists as proof that these endeavours can turn out alright in the end.

Oh, and please someone give Nasim Pedrad her big break already. Whoever thought of casting her in this has my eternal gratitude.